I wonder why? Here's the quick rundown - I looked out the kitchen window and saw this juvenile hawk sitting on the back fence. Fortunately, my big lens was already mounted to a camera, but the Venetian blinds were closed and there was no way to open them without spooking the hawk. Before I could figure out how to resolve that issue, the hawk flew down to the bird bath. The blinds on the back door were pulled up about six inches so I got down on my belly on the kitchen floor and shot through the glass. I wasn't happy with the results, but it was my only option. The hawk was only there long enough to take a couple of drinks. I got a total of eight photos and only three were usable.

I believe this to be a Cooper's Hawk and the only way I made that determination was the length and shape of the tail. You can't see the end of the tail in these photos, but it was rounded like a Cooper's as opposed to the shorter, square tail of a Sharp-shinned Hawk. That doesn't mean I'm right, but trying to determine the correct ID between those two species drives me nuts. It doesn't really matter. It's a hawk drinking from a bird bath - something I've never seen, much less photographed. 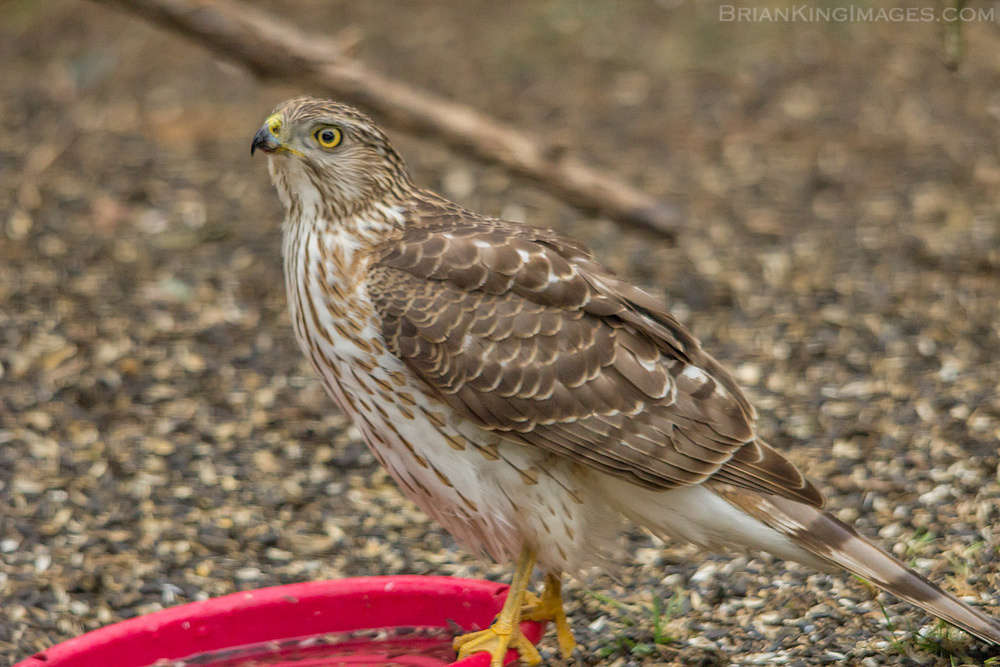 Wally(non-registered)
Superb photograph, Brian! Especially considering the circumstances. The only time I've seen our local hawks near our birdbath has been an attempt to snag a dove for lunch!
Ida P. Krause(non-registered)
He's stunning. I just love the intense look these hawks have. I think you got some great shots of this one.
Barb Hale(non-registered)
These are some terrific photos especially since it was a difficult situation. I can't say I've ever seen a hawk at any of our bird stuff. Cool!
pattisj(non-registered)
Nice shots! Pretty bird, but sadly, not many birds hang around to make friends with it.
Carol Carson(non-registered)
Well, I would be very happy with those photographs. You captured the (wonderful) moment.
No comments posted.
Loading...
Subscribe
RSS
Recent Posts
Picked Off Going Up Let It Snow Last Light Cool And Calm Locked Out Christmas Snow Insulation Ruby Red Watercolor
Keywords
landscape sky fence great blue heron barn cardinal clouds tree ruby-throated hummingbird reflection
Archive
January February March April May June July August September October November December
© Brian King Images
User Agreement
Cancel
Continue